skip to main | skip to sidebar

The City of Kimberley
Northern Cape
South Africa
The capital and the only city of the province, Kimberley is in the centre of South Africa (36 Km of the geographic centre) with two national roads leading to it, the NI2 (Cape Town via the NI to the south and Pretoria/Johannesburg to the north) and the N8 going east to west 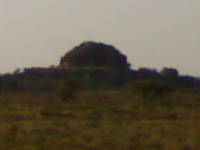 The Geographical Centre of South Africa

A plaque telling about the site and another purrrr..fect Northen Cape Sunset.
In 1871, diamond deposits found on a hillock dubbed Colesberg Kopje on the farm Vooruitzicht, owned by the De Beers brothers, led to a mad scramble for fame and fortune and the world’s largest, hand-dug excavation, the colossal Kimberley Mine or Big Hole. 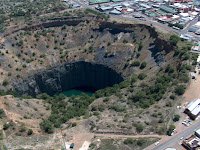 By 1872, the tents and shacks of more than 50 000 feverish diggers crowded New Rush, the mining town surrounding the hillock. Overcrowding, insufficient water, unsanitary conditions, disease, heat, dust and flies were ever present problems in the mining town’s early days. In the fledgling city’s many gambling dens, card- and loan sharks thrived on a diet of other people’s blood, sweat and tears. The stakes were high and the ruthless ruled as fortunes were made and lost in a day. Some found only despair and heartbreak, but others struck it rich. Spacious homes began to rise from the dust and, in 1873, the town was renamed Kimberley, after the Earl of Kimberley, British Secretary of State for the Colonies. Despite the town’s severe dose of diamond dementia, it was, by 1900, a prosperous town. Its complex, higgledy-piggledy web of roads is a topographic reminder of a chaotic past. And not one, but five big holes, and a number of smaller mines, had been gouged out of the earth, reaching ever deeper into its bluish, diamond-bearing Kimberlite pipes! The Kimberley Mine was closed in 1914. Covering 17ha, it reached a depth of 1 097m and yielded three tons of diamonds. A bawdy shanty town born of a desperation and greed redolent of the American Wild West, Kimberley swiftly donned a mantle of architectural elegance. Today, it is a prosperous, thriving metropolis with Victorian buildings that complement the more modern buildings of the CBD. Lacking the furious pace of South Africa’s larger urban giants, it is perhaps the country’s most innovative town. Home of our first flying school, our first stock exchange and the first city in the Southern Hemisphere to install electric street-lighting, it is mining a brilliant future from a glorious past.

The frenetic activity, the extraordinary web of pulley cables leading to a six-storey staging platform and the sight of up to 30 000 miners working 3 600 claims over 1 7ha have faded into the sepia memories of photographic archives.

Yet, somehow, memories of the Kimberley tent-town’s days linger. Many old buildings, museums and one of South Africa’s most important art galleries lend an historic ambience to the city that thrust its way to prominence during the diamond rush. A reconstruction of the original ‘rush town’ stands alongside the incredible Big Hole, the largest hand-dug excavation in the world, offering visitors insight into the lives of those who lived and worked through the dreams and nightmares of a vibrant history we take for granted. During the Anglo-Boer War, Kimberley was besieged by the Boers for 2 four months. In this time, many heroes rose to prominence. Boer forces surrounding Kimberley showed how a determined, small and under-resourced force could keep the British army at bay for months. But Kimberley’s diamond story and siege are part of only the most recent history here. A rich archeological heritage, including stunning examples of ancient rock engravings, reflects a past that reaches back to the very origin of humankind. 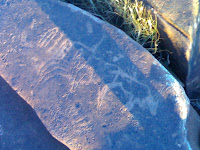 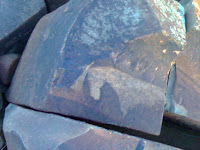 Bushmen Art at the Wildebeestkuil Rock Art Site.
Posted by Rob Gibson at 1:55 AM